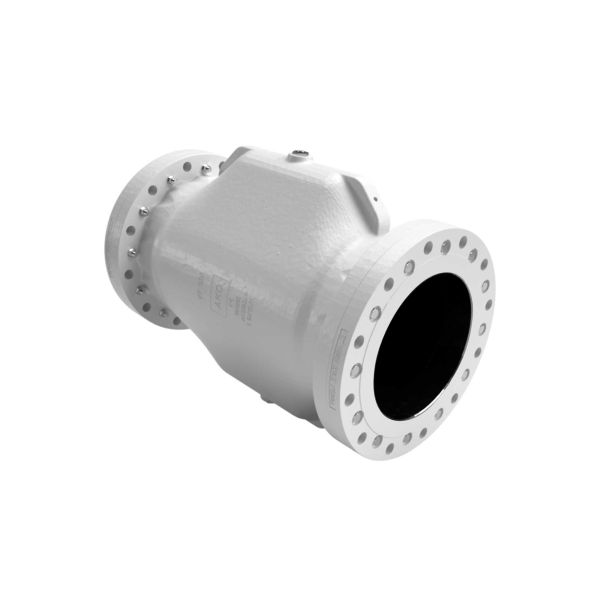 Selecting a Valve to work alongside a Filter Press

A flow control company working on a job for the end user was looking for some assistance with a valve selection.

The proposed arrangement of a filter press and its discharge chute to a drum filling enclosure were to have two actuated valves assembled to the equipment. Normal operation for the application was as follows:

The material is a damp cake (circa 40% wet), picture thick muddy clay.  Particle sizes will be fine, << 1mm.

Press liquors are alkalified water at pH 10-11.  Occasionally there may be some 9% w/w nitric used for cleaning.  Materials should have resistance to weak nitric and caustic solutions.

Liquors and solids are at ambient temperature

Ideally, the company wanted the chute to be 300 NB, however the aperture from the catch tray at the top of the chute was smaller to try and keep the solids off the upper valve. They could accept a reduction in the size of the chute, particularly the upper valve if it opens up other valve options.

The flow control company had wondered about an inflating pinch valve for the upper valve and a slide valve for the lower.  Both are typically rated for higher pressures than they needed and weight was going to be an issue, since it will be awkward to remove the valve from under the press.

AKO UK offered two Pinch Valves from the VF range for this application, in DN300. AKO configured an aluminium bodied pinch valve rather than stainless steel to reduce the weight. EPDM was the type of internal rubber sleeve offered, which was researched with the application as well as Nitric Acid at 9% and Caustic. The PN10 aluminium flanges on this valve had stainless steel bushing contact parts, so the media would only come into contact with the stainless steel wetted parts and the EPDM rubber sleeve (it would not meet the aluminium body or flanges).

The VF type Pinch Valve is an extremely robust model, available in sizes DN40 up to DN300. A range of rubber sleeve materials are available including natural rubber, nitrile, EPDM and food quality versions to name a few. The fact that the elastomer sleeve closes in the same elliptical position every time ensures a longer service life, and if the valve is operated correctly it will perform many cycles. Depending on the application, in some cases the sleeves last years and are only replaced during maintenance service checks.

The sleeve is the only wearable part of the Pinch Valve, so rather than replacing the whole unit, you only need to keep a spare sleeve on the shelf. There are also no additional gaskets, seals, packing or other parts to replace – the Pinch Valve is simply made up of a body, two end connections and the rubber sleeve. The total cost of ownership of a Pinch Valve is excellent.

AKO Celebrate 30 Years in Business
June 21, 2018
Contact Us
10 Reasons to use AKO Products

5. Various connections to suit most applications

5. Various connections to suit most applications